The author reflects occasionally on the topics discussed, but she lets the oral history of a remarkable family from rural North Carolina do the talking. This account takes the reader to a time of change that could likely happen only in America. Ms. Raper has recorded a wonderfully authentic swatch of Southern Americana, ranging from tobacco raising to hog butchering, old-time revivals to neighborhood corn shucking, and clannish feuds, to helping one’s neighbors in times of need. In her new book An American Harvest: How One Family Moved From Dirt-Poor Farming to a Better Life In The Early 1900’s, she brings readers into her husband’s childhood. This family memoir, in the tradition of oral history, conveys the inside-outs of what it was like for a growing family to eke out a living on an eroded tobacco farm in the South. See http://www.cardyraper.com for details. more

As a Women of Science, a Fellow of the American Association for the Advancement of Science, Dr. Raper stands as a fantastic role model for young women. She published extensively in national and international scientific journals and au 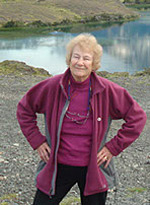 thored several book chapters. In 2013, she published: “A Woman of Science: An Extraordinary Journey of Love, Discovery, and the Sex Life of Mushrooms.”

Born in 1925, amidst a pack of five older brothers, her family memoir conveys the inside-outs of what it was like to live the uncertain life of a growing family in the rural South.  Trying to eke a living from an eroded land, without the conveniences of running water, electricity, central heating, or automobiles. The challenges of a mother raising sons and a daughter, amid two adults’ advancing careers, at a time when the concept of women working outside the home was not only rare but taboo.

At the age of eight, she yearned to be a scientist and announced to her family, “When we grow up, my brother Jonny and I want to be scientists.” Her mother replied, “That’s nice Dear; Jonny can be a doctor, and you can be a nurse.” “But Mom,” said Cardy, “A nurse is not a scientist!” After little encouragement to become an expert all through college, Cardy meet and falls in love with her mentor at the University of Chicago, Red Raper, who taught her a woman can do anything, including research on the sex life of fungi. They marry, have children and work together.  After her husband died, at the dawn of the molecular genetic age, Cardy, now 52, completes her doctorate, finds a job with a lab of her own–first Wellesley College, then University of Vermont.

She received a Masters of Science degree from The University of Chicago in 1946 and a Ph.D. from Harvard University in 1977. She was Research Associate and Lecturer in Biology at Harvard (1974-78), Assistant Professor of Biology at Wellesley College (1978-83) and a Research Professor at the University of Vermont from 1983 until her official retirement as emerita in 1994. She received over 20 grants for her research from the National Science Foundation, the National Institutes of Health, and the United States Department of
Agriculture among others. She was an invited speaker at numerous international symposia, colleges, universities, and industries in the U.S., Canada, Europe, Israel, and Japan. Listed in “Who’s Who of American Women”, “ American Men and Women of Science”, “The World Who’s Who of Women”, Dr. Raper was recently honored for her first book: “Sex in Fungi: Molecular Determination and Evolutionary Implications”. Editors: J. Heitman, et al.